On Thursday, September 22, 2022, CSUA held the first annual Summit on Substance Use Disorder Stigma Reduction. The summit was an interdisciplinary event that brought together practitioners and scholars from a range of fields (e.g., public health, government and public policy, psychology, criminal justice) to consider research, policy, and practice around the issue of stigma reduction in the field. This event was supported by generous contributions from the Penn State Consortium on Substance Use and Addiction and The Douglas W. Pollock Center for Addiction Outreach and Research. View the agenda here.

The summit's keynote speaker was Dr. Alex Elswick. Dr. Alex Elswick is a tireless advocate for people with substance use disorders. He currently serves the University of Kentucky as an Assistant Professor and Extension Specialist for Substance Use Prevention and Recovery. Alex is a trained researcher, recovery coach, and mental health therapist, as well as the co-founder of Voices of Hope, a peer-driven recovery community organization. But most importantly, Alex is himself a person in long term recovery from the chronic disease of addiction.

Held virtually via Zoom and drawing over 120 attendees throughout the day, the conference kicked off with a welcome from Paul Griffin, the director of CSUA and professor of industrial and manufacturing engineering, and an introduction of the keynote speaker from Stephanie Lanza, former CSUA director and the director of the Edna Bennett Pierce Prevention Center. 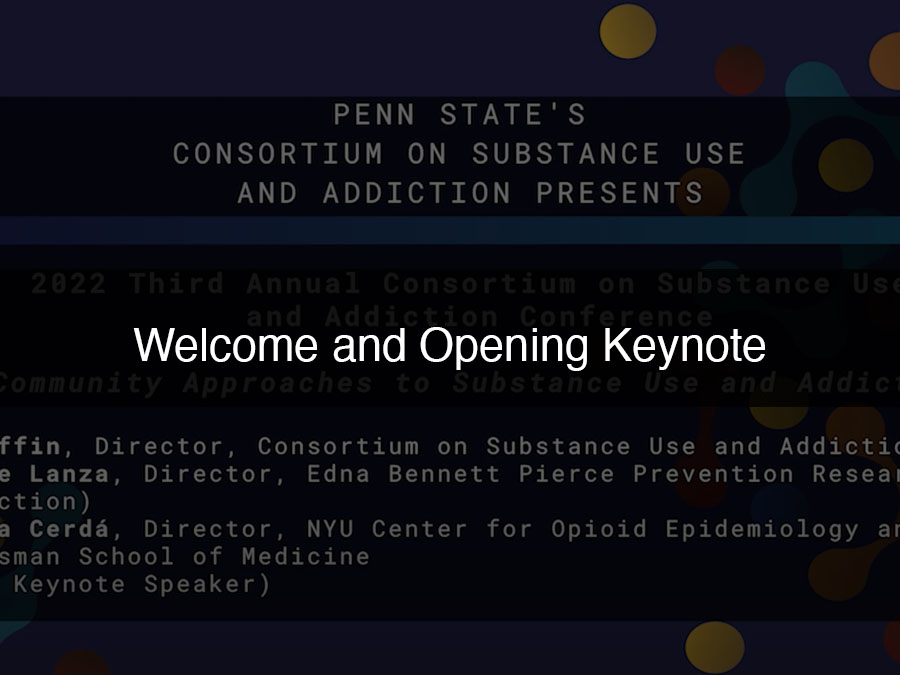 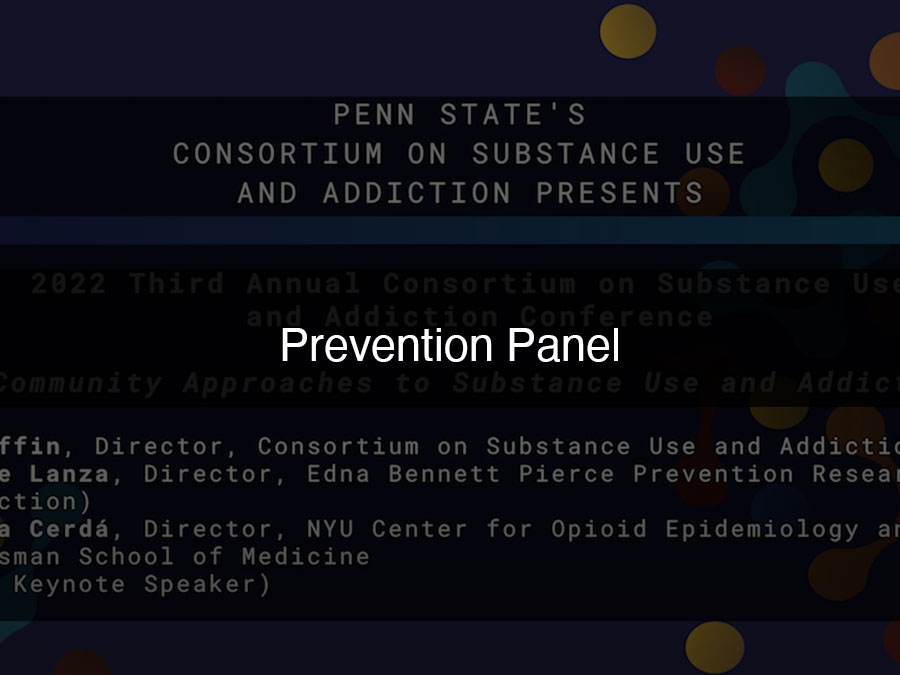 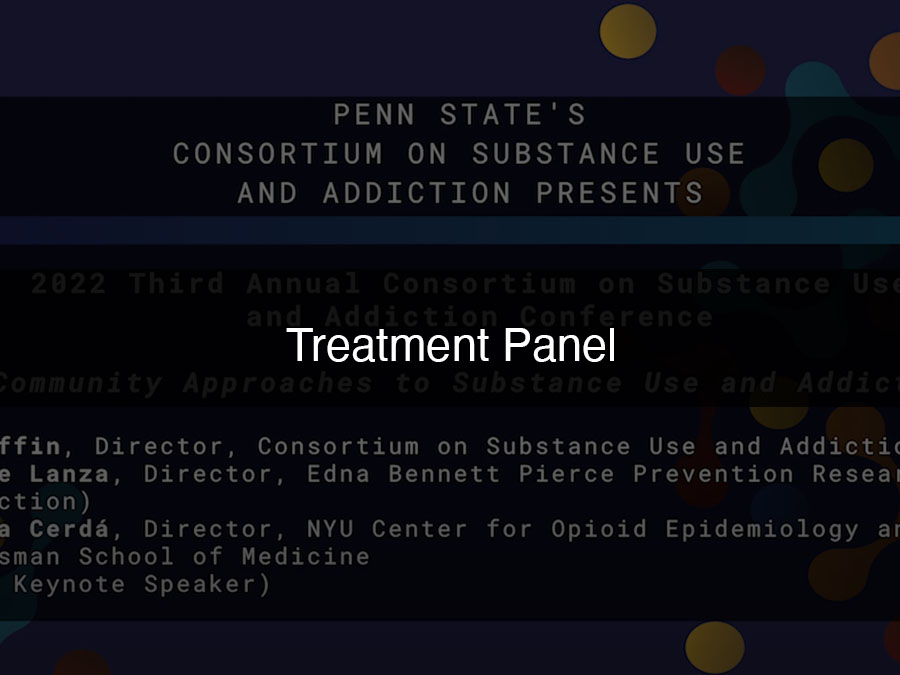 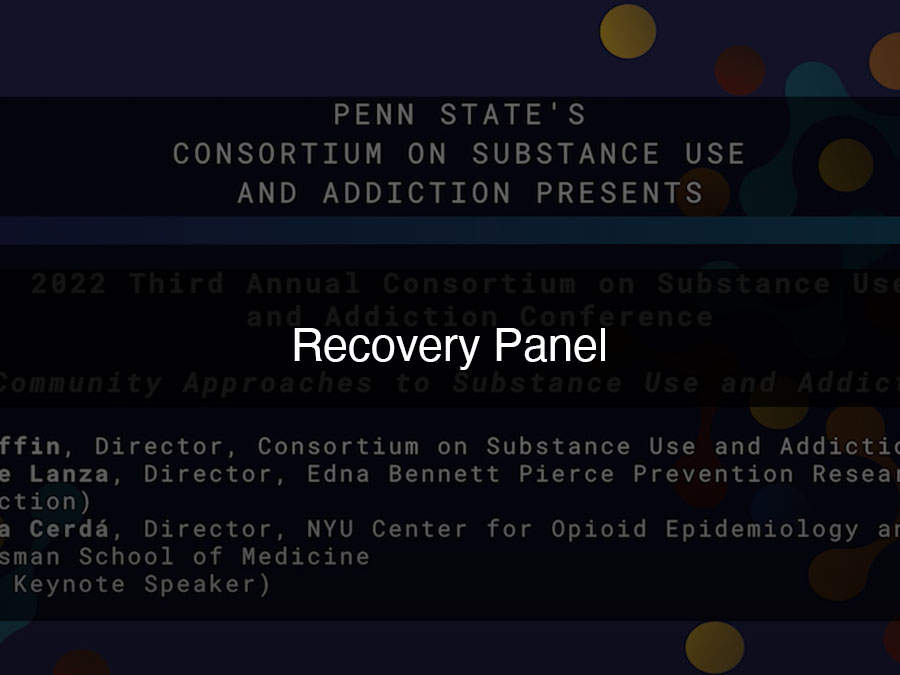 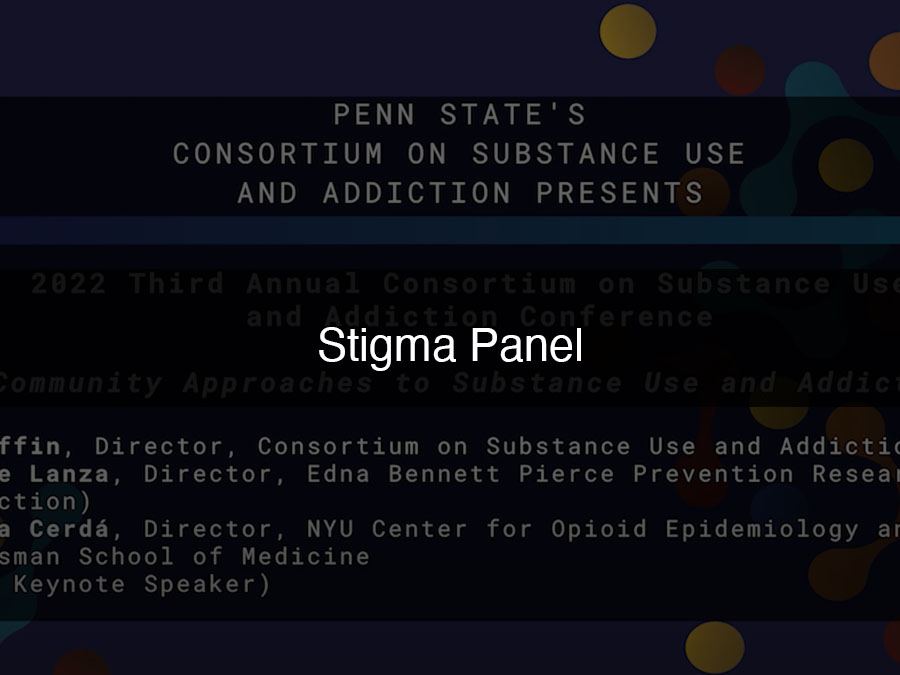 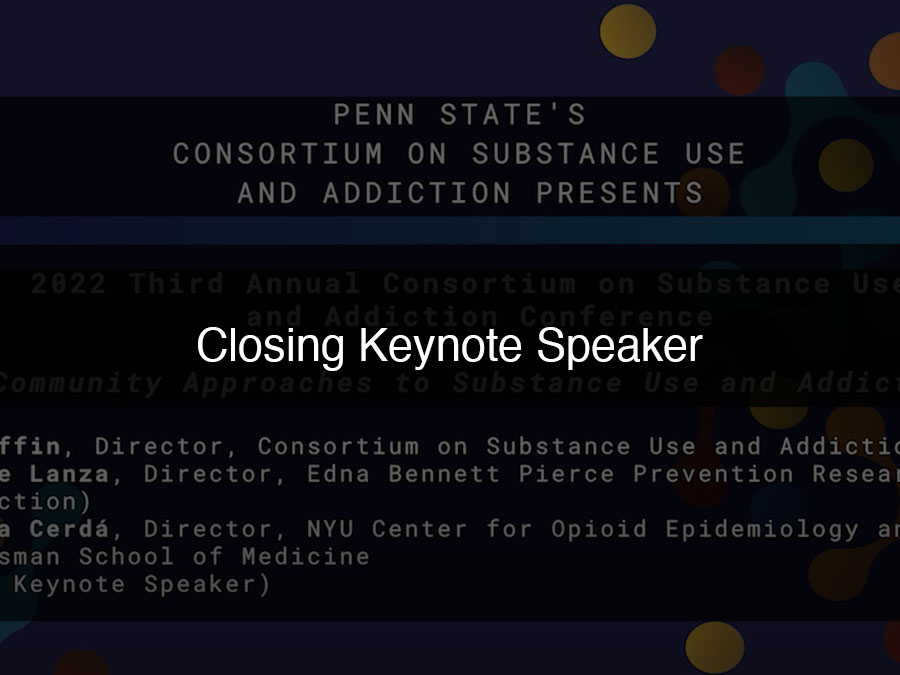 Held virtually via Zoom and drawing over 120 attendees throughout the day, the conference kicked off with a welcome from Stephanie Lanza, outgoing CCSA director, professor of biobehavioral health and director of the Penn State Edna Bennett Prevention Research Center (PRC), along with opening remarks from Penn State President Eric Barron.

Penn State’s Consortium on Substance Use and Addiction hosted the inaugural conference, “ Envisioning a Future Free from Addiction: Research, Programs, and Practice to Prevent Substance Abuse,” on April 29th, 2019. The conference kicked off with a community engagement breakfast featuring presentations from Penn State Vice President for Research Neil Sharkey and Geoff Kolchin of the Pennsylvania Commission on Crime and Delinquency, among others.

“With 24 campuses spread across the Commonwealth, Penn State has a campus within 30 miles of 96 percent of Pennsylvanians," said Barron. "We have tremendous reach, and the potential to have an impact on this crisis is strong.”

Thompson said, “There's not a zip code in this country that hasn't been impacted by substance abuse," and called the epidemic "the public health crisis of our lifetime.”

A session on preventing the next substance abuse epidemic from a national perspective began with a keynote address from Thomas McLellan, former deputy director in the Office of National Drug Control Policy during the Obama administration. McLellan summarized findings from the 2016 Surgeon General’s Report, noting how increasing prices and taxes on alcohol has reduced drinking by 30 percent. He also detailed the government’s success in reducing cigarette smoking.

“A steep decline in smoking rates over the last 50 years is the result of good science in partnership with the government and communities," said McLellan. "Penn State can leverage its resources to do the same for substance misuse.”

“Nearly one-third of opioid users have overdosed in the past year, and two-thirds of those have overdosed more than once. We need to think about how these substances are coming into our communities," he stated.

“Reaching the 15,000 youth within PROSPER with interventions to prevent prescription drug misuse would lead to over $6.75 million in short-term societal benefits and could lead to major public health impacts,” she said.

Pennsylvania Secretary of Health Dr. Rachel Levine wrapped up the afternoon sessions by explaining the history of opioid and heroin addiction in Pennsylvania and the Commonwealth’s three-pillared response to the crisis: prevention, rescue and treatment.

Levine has advocated for a number of initiatives in the state, including the Opioid Stewardship Program, which works with medical schools to provide education on pain management, and the Prescription Drug Monitoring Program, an online tool to help physicians identify patients who are struggling with opioid addiction. The program has contributed to the reduction in opioid prescriptions in the state by 25 percent. In addition, Levine has advocated for the PA Prescription Drug Take-Back Program, with 813 take-back boxes spread across the state, including locations near University Park.

In 2018, Levine signed a standing order for first responders and the general public to expand Naloxone access, and spearheaded last year’s Naloxone Day where over 6,000 free Naloxone kits were distributed.

“Naloxone is a unique drug, its only purpose is to reverse opioid overdose and save lives,” Levine explained. There will be another Naloxone Day occurring this summer.

“While we are in the sixth iteration of 90-day statewide disaster declaration to help combat the heroin and opioid overdose epidemic, last year for the first time in five years, [Pennsylvania] saw a significant decrease in overdose deaths. We have bent the curve,” Levine concluded.

Thank you to our sponsors and partners for this event: